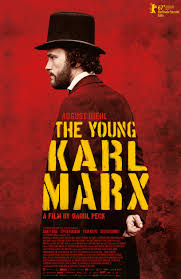 The film recounts the story of a young thinker and his friend who live in the midst of a Europe with hunger, recession and at the edge of the industrial revolution commanded by Sirs Monarchs. In parallel the film shows a working class where both men, women and children are forced to work given the need for a new thought to have the minimum to eat. Through them, the struggle where the argument is intrinsically linked to the facts occurred in that society. Both face the current system unleashing a revolutionary struggle that would have no return and that changed the world forever. The characters in the film are Karl Marx and Frederick Engels.

The film begins with a retraction of the situation of nineteenth-century of Europe. Two thinking minds emerge and intersected and found common ground in their thoughts. Then rises an ideology that guides their minds and triggers a series of debates in rich societies and at the same time encourage the working class to fight for their rights. The film recognises the power and their rights.