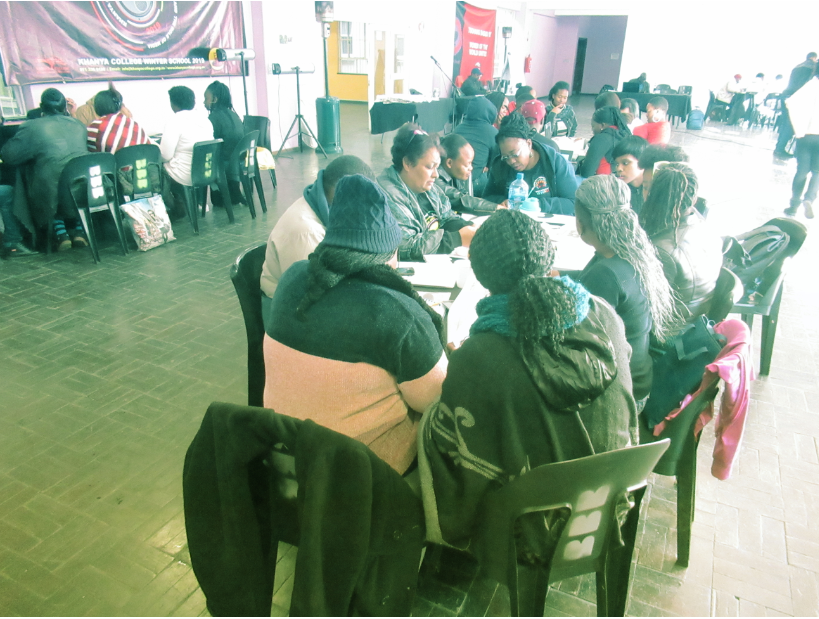 Building on the progress made yesterday, early on 11 June 2019 the School looked at the way alternatives to mainstream media can emerge through trying to understand social bases, the structure of capitalist society and the role of ideology. This happened through a session facilitated by Oupa Lehulere. Lehulere showed the kinds of relationships that exist in capitalist society using a pyramid graph. In this way, the participants were able to see that the ruling class is only a small but powerful group of people who hold most of the control over almost all the instruments of power. They dominate politics, economy. They exploit, repress and oppress people.

This group will do anything that will benefit them regardless of the impact their actions on others. Conflicts arise in society, so in order for general peace between the capitalists and the working class, there has to be something which plays the role of holding society together. Ideology in capitalist society plays this role. It is very important to how the society ‘works’. Lehulere noted that capitalists are a tiny minority but hold power in society. Since capitalists own the means by which humans must produce the goods and services which keep them alive and even well-off, they have a powerful leverage in society.

At the receiving end is the working class the people who have to earn their living from working. The majority of the working class lives in poverty and have little to no formal education, however Lehulere’s talk focused on the way the ruling class maintains its power and how this is done through media by either a slender or biased representation, and even complete silence on issues that affect this class.

Lehulere spoke about ideology and how the ruling class use it to maintain its power, to get hold of the mind of the oppressed. He said that conforming to the dominant ideology usually begins in the family, then continues at school, in the media, religion and culture. He also spoke on the influence of the media and how it has changed almost everything within society.

The speaker also spoke about what has been called the most powerful function of mass media, the economic role. It is not a coincidence that the biggest source of income for media companies is from advertising agencies.

Advertising agencies have a strong influence on what newspapers report, prioritise or how they convey news; this due to the over-dependence of the latter on the former. Because of this relationship between the advertisers and media companies, newspapers have been used as carriers. Media creates consumers and in turn reaps big business rewards from advertisers. Newspapers, billboards, TV channels, and even radio, etc., do through advertisements and showing

An uglier side of media still, was discussed. Lehulere gave examples of the way that media helped manufacture consent among members of society by drawing on the way newspapers headlines characterised the students. Students protesting for fee-less education for all were characterised as ‘rebels and rage’, while in outlets like the eNCA and News24 the students were turned into hooligans that caused much multi-hundred million Rand damage. There were scarce to no news about the brutality the students faced from state police or outrage about slain #FeesMustFall participants like Katlego Monareng.

The speaker said that media made it easier for society to accept repression. This was the case in 2012 when 34 miners were massacred in Marikana. Media houses such as the Business Day only called what happened “violence”, an ambiguous word. Through this using media this way, repeating certain beliefs creates a kind of consciousness which does not help the working class.