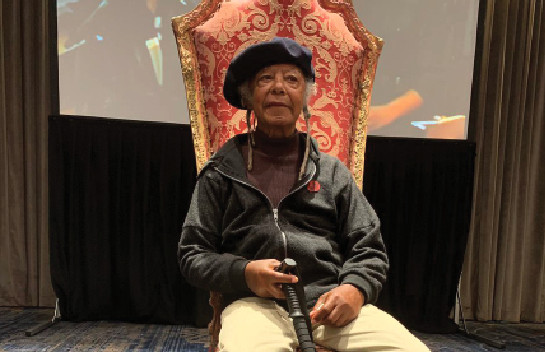 Jozi Book Fair patron, James Matthews is a poet, writer, and publisher who has produced five books of poetry, a collection of short stories, and a novel, which he edited. Most of his work was banned under the previous government and was translated and published overseas. For 13 years he was denied a passport and was placed in detention from September to December, 1976. Solitary confinement was widely used during the apartheid years; its purpose being to disorient, to dehumanise, to undermine the detainee’s sense of self-identity.  Matthews was placed under this type of detention. James Matthews agenda with the one weapon jailers could not take away from him – his ability to turn words into poems.

He has made his work available for the schools that JBF works with at no cost. Khanya Publishing has republished his work which was out of print and has made available it for children in the OVCs and the schools in townships. They have a chance to meet and have a conversation with him at the festival.

James Matthews celebrated his 90th birthday on the 24th of May. .

Only a few out there have a heart of truth and are able to truly show the definition of love. It does not matter what you do or how you do it but what matters is how much you love you put in it. Your input towards JBF has not only but continues bringing people together to learn and gain more insight not only coordinators but children are being shifted from mental slavery of poverty and less interest in literature to being interested and creative capacity to being unfolded.

A future of more bright and alive children is born and our world might actual in the next coming years. Take a turn for a change thanks to people like you. We thank you for fighting for the freedom that we have today. I will like to wish you a happy birthday. 90th HAPPY BIRTHDAY.